NORT Refreshing Ale is a thirst quenching beer, golden in colour with a fruity aroma and refreshingly crisp finish. Brewed naturally, unlike other beers in the zero category, NORT’s high-quality taste is a result of the craftsmanship that goes into creating it.

NORT’s creators, Modus Operandi Brewing, observed that simply removing alcohol from a beer often leaves the product tasting sweet and plain, so the team set out to craft a new non-alcoholic beer using traditional brewing methods. The result lead to NORT recently taking out a silver medal at the Australian International Beer Awards in the non-alcoholic beer category.

As of July, NORT will boast four alcohol-free varieties, Refreshing Ale and the latest additions, the world’s first Pacific Ale, Tropical XPA and All Day IPA. All the beers are below 60 calories, which makes NORT’s range the lowest calorie Australian made beer in the country.

Modus describes the Pacific Ale has having flavours of passionfruit and tropical aromas, with a golden haze appearance, a light sessionable body and coming in at just 49 calories.

Jaz Wearin, co-founder and owner of Modus Operandi Brewery and NORT said: “NORT was born amidst lock-down. Like most of the world I was juggling a business, parenting and trying to stay healthy and focused. As a brewery owner and beer fanatic, I soon realised there was a massive need to grow the non-alcoholic beer category and offer Aussies a non-alcoholic beer that is carefully crafted and rich in flavour. NORT gives you options. A beer to balance with an  alcoholic beverage so you can drive home, get out for that early morning surf or head into that board meeting. Or it can be a beer you can have at any time of the day without feeling guilty or fuzzy afterwards.”

“We worked hard on the recipe, ingredients and brewing process to ensure this was 100% non-alcoholic, but also 100% crafted beer.”

See the full article at: https://drinksdigest.com/2021/06/23/nort-releases-worlds-first-non-alcoholic-pacific-ale/ 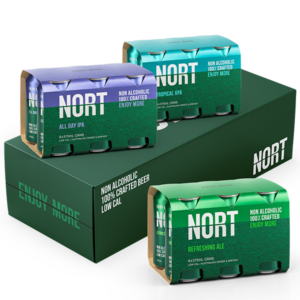