Jaz Wearin is exactly the type of person crafted zero alcohol beer is targeted at. She loves a beer but can’t always have one as she juggles her busy life as a businesswoman, mum and everything else that life throws at her. But when you’re the co-founder of one of Sydney’s most well known breweries, and about to turn the first sod on an all-new one, there’s no need to drink someone else’s, you make your own. So in comes NORT Refreshing Ale to the booming zero alcohol beer sector, the result of an epiphany moment for Jaz just a few months ago and what will be in market next week, distributed nationally by Dan Murphy’s and BWS.

Jaz, who founded Modus Operandi on Sydney’s Northern Beaches in 2014 with husband Grant, said her own busy life was the catalyst for the release. The Wearin’s now have a two-year old at home as they combine their Mona Vale brewery’s output with the planning and imminent construction of their all-new production brewery and brewpub in Merewether in Newcastle.

“I sleep well at night let me tell you! 2020 has been a wild ride and probably one of our busiest in our six years of operation,” Jaz said.

“The non-alcoholic space has interested me for some time after being pregnant, raising little people and working pretty hard on our dream of running a family-owned brewery. Basically I love beer but I have found I need balance. Cue NORT.”

The category has seen a tremendous amount of activity in recent months, with Australian breweries like Upflow and Heaps Normal, and Big Drop out of the UK, gaining acclaim and national interest, while last month Carlton & United launched a zero alcohol version of their Great Northern beer in Queensland and the Northern Territory. In July, the Endeavour Group, through its Dan Murphy’s and BWS stores, said non-alcoholic beer was its fastest growing category.

It all makes perfect sense to Jaz.

“I think this is just the tip of the iceberg. I believe the strength in this category comes down to balance. As we move into an even more connected world, where it is hard to switch off, people are putting immense importance on their health and well-being.

“Non-alcoholic has been growing for some time, but I believe COVID has accelerated this growth.

“People are working and schooling from home and are needing to find balance for their mental well-being. That’s one element. The other elements are the new generation seeking out non-alcoholic products like we have never seen before and my generation, which have decided they want more balance.

“That doesn’t mean no alcohol, it means balancing awesome hazy, hoppy IPAs and then flipping over to a non-alcoholic so they can drive home, put their kids to bed, get up in the morning for a surf and then hit the day head-on feeling great. You can see the logic in that.”

NORT is the result of Modus’ new brewer Matt Hogan’s talents, and when released, Jaz said people can expect “a thirst-quenching beer, golden in colour with a fruity aroma and refreshingly crisp finish”.

“It was extremely important to bring out a non-alcoholic beer that had all the aroma and taste benefits of beer. We worked hard on the recipe, ingredients and brewing process to ensure this was 100 per cent non-alcoholic, but 100 per cent crafted beer.”

NORT will be available through Dan Murphy’s, BWS and select
indie bottle shops and grocers from Wednesday (September 23). 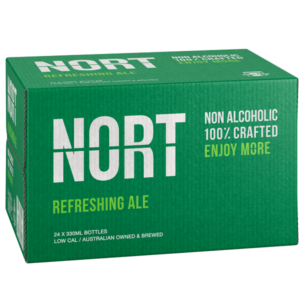